After hearing about Journeyman's tales of lousy cobblers I have decided to dedicate a thread to serve aussie blokes who need the good services of one of the better cobblers in Oz.

There are some excellent cobblers in the `private shoo world' who shall go unmentioned, but l will discuss some of the good ones who make their services available to the public.

Manfred's Shoe Lounge
Said to be the best in Melbourne, and according to what Manfred tells me he may be one of the very best there is in Australia. Certainly some of the best highend shops In Melbourne go out of their way to use his repair services over others who are more closely located. While l haven't used Manfred so far, a discussion with him over lunch on the phone showed me he is passionate about his craft and strives to be the best there is. He doesn't want to be second best, he wants to be the best cobbler in Oz. I like that he took the time to have a good talk with me. I also like that he stocks a decent collection of English goodyear welted shoes in his workshop and he prefers to work with good shoes. He is obviously not your usual cobbler guy, and his work background is impressive. I feel confident he is very good indeed, and his work certainly proves this.

Manfred's work speaks for itself, no doubt he is one of the best!
Refurbishment of a John Lobb rtw. 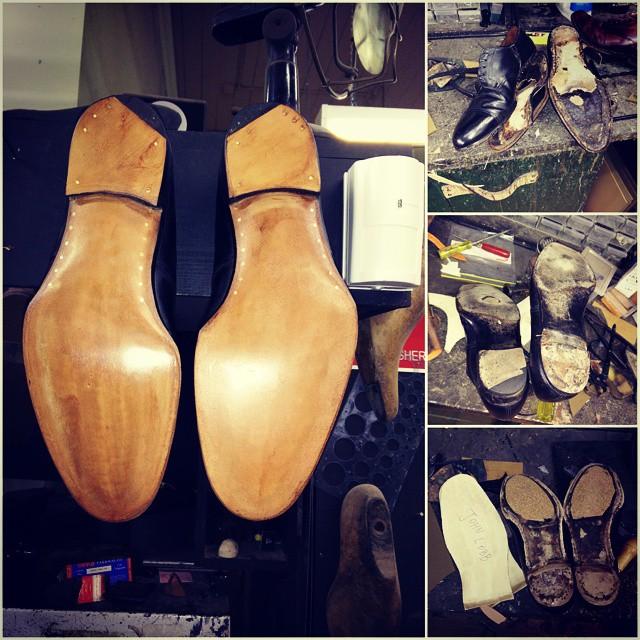 His skills go way beyond the average cobbler as can be seen with creating a new welt and hand rewelting it to the gemmed plastic feather of a goodyear welted shoe. Not many cobblers are skilled enough and/or are prepared to do this type of work anymore. 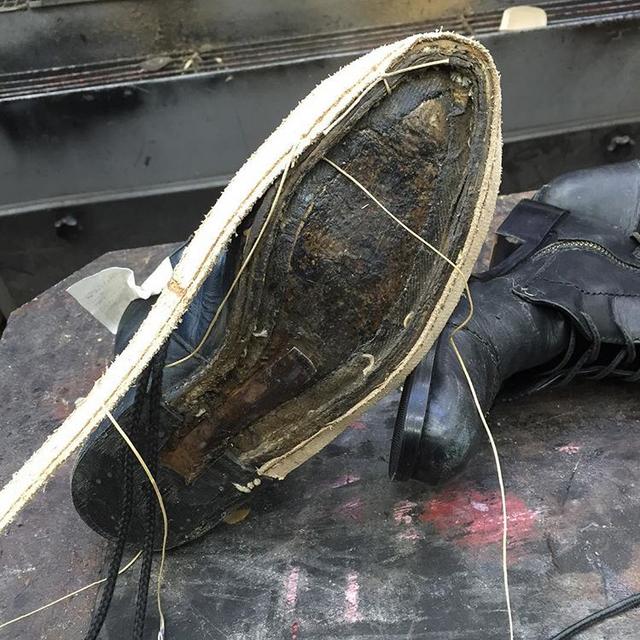 Manfred's shoe lounge - very classic Melbourne.
Manfred's seems to understand the culture here. His workshop is very clubby and rock n' roll and alternative, and he stocks shoes to serve the various Melbourne types. American's reading this may scoff at Jeffery West, but this is Melbourne and lots of local blokes and dudes live and breath this stuff, and l totally get it! The rock n' roll and alternative dudes need to get their shoes from somewhere, and Manfred's is just the ticket.

The biggest collection of Loake in Australia

I will report more about Manfred's in future posts, but for more pictures and an opportunity to buy his shoes and use his services see these links.

I've talked to Manfred about getting the really top leather and polishes and taking the cobbling right up to match the very best in the world. Melbourne has 5 million people now so it is time to play the big game and match it with the best. I'm talking rendenbach leather, bakers leather, shoe trees, Saphir and Boot Black polishes and offering repair packages that take shoe services in oz to a whole new level. Imo it's not just about visiting the cobbler anymore, it's about getting the full treatment and getting excited and feeling good about it.

Oz has always lagged behind with the average polishes and leathers and services, but now it's time to reach the top of the mountain because we now have the population and number of shoe lovers which will warrant it.

I will also invite others to give cobbler reviews of their top interstate cobblers. I hear there are some very good ones around.
Last edited: Mar 14, 2019

Another master trained cobbler with a great attitude to his craft is Nick Pascuzzo in Manly NSW. Needless to say he is a busy guy but he is presently rewelting (by hand) a pair of 1920s kangaroo boots I scored on eBay. Also does a big number of RMW boots.

Here is another guy l found over lunch. Nathan Baxter. He is new to the industry and his work is alittle rough, but he shows lots of promise and is really enthusiastic.

Here is a top repair man from the private shoo world. I won't mention his name,but he is one of the very best there is!!!

Repair 1
- makes his own thread
- uses his own gemming tape
- hand welts the shoe
- machine stitches the soles on.

Gemming failure so new gemming tape had to be reapplied.

Made his own thread

The same legend from the private shoe world shows why he is such a superstar. A dog ate this bloke's shoos, but Mr magic repaired them.

Other good cobblers in Melbourne.


Cobblers of Kew
- official boot repairer for R.M.Williams.
- one of the few that has machines that stitch the soles on
- highly regarded
- nice chap
(I used him once to resole my R.M.Williams)

Chris the Cobbler
- one of the few who has a blake and outsole stitcher
- can also do hand welting
- can also do wood pegged sole repairs by hand to cowboy boots etc
- highly regarded
- Chris and his helper Richard are top blokes
- cobbling is in his blood....his father used to own 5 cobbler shops back in the old days.
- Richard also earned his stripes at the Mc Leod shoe factory, he is no slouch.
- does regular sole stitching work for old Fitzroy bootmaker Tony Carol

Manhatten shoes
- Alex Cher is one of the great shoemakers in Melbourne. He was properly trained in Russia and learned for many years how to make shoes completely by hand. He is a wealth of knowledge with expertise that few can match in Australia. He also does shoe repairs.
- He doesn't have any sole stitching equipment and won't send anything out for stitching either.
- He was going to be my teacher and have me eventually operate the business, but it wasn't going to be practical to make it happen. Most of his income comes from making women's shoes, but that is not something i'd want to be doing. It's very difficult to make money from women's bespoke shoes unless you charge really big $$$$, there are reasons for this. The custom shoe business is really tough to make a living in. Would have been fun though.
- Alex taught me so many things, and he also taught me about the brutal economic reality of bespoke shoemaking. He also made me understand the differences between the economics of women's shoes v's men's shoes etc.

Famous Melbourne cobblers who are nightmares
- some other cobblers are famous and have all the equipment, but they have lousy personalities, bad reviews and do sloppy work. I went to one famous cobbler because he was a `somebody' in the cobbling world, but his personality was like cardboard, and even that comment is generous. Other comments are far less flattering. He added a heel to my Vass shoes and then painted the edge of the sole where paint got everywhere and made a mess of my shoes. It told me this famous expert wasn't such an expert, nor did he have pride in his work. I believe all the overwhelmingly poor reviews about arrogance, poor workmanship,snide remarks and throwing people out of the shop. A very difficult person.

- I also went to a famous shoemaker who was the worst shoemaker and repairer l have ever seen. He told lie after lie and promised the world and delivered on none of it, and all his mates helping him also told lies and were shifty and made mistake after mistake. He made shoes for the govenor etc and got good reviews, but he was the worst l had ever seen....couldn't even topy a shoe properly.
Last edited: Apr 2, 2019

Chris The Cobbler used to visit a Ringwood shop 2 days a week. Sadly he doesn't visit anymore. He used to be in Rosanna but has shifted to Macleod.

Lots of the cobbler shops have shut down due to masses of people buying disposable shoes these days. And many cobblers lack the old skills that were once common, and finding a cobbler with sewing machines for stitching on the soles are hard to find because the cobblers now stitch so few shoes that they don't bother paying the money for machinery these days. Sometimes a cobbler may only stitch a pair per week because for years Melbourne had very few goodyear welted shoes that were available, and all were very expensive. It's only in the last 12 years that goodyear has become much more widely available and more reasonably priced.

Few bought the shoes because they were always so expensive. Church's were $900 over 20 years ago.

Alex told me there years ago there was no stitching machines for many many miles in the south east suburbs of Melbourne, and he would have to take half a day off to travel across the Yarra if he wanted to have shoes stitched. This lines up with the above article saying few top line cobbler shops are left. 40 years ago in the CBD they were everywhere and many near railway stations and they did hand welting too. One near Flinders Street had only a small shop (big as a bedroom) and no machines so he'd do all the stitching by hand. Not many in the northern suburbs either.


On The Mend (Fitzroy)
- does sole restitching work and other repairs.
- highly recommended.

Mr Magic from the `private shoo world' makes a return!

From this to this - yet another dog eats some bloke's shoes