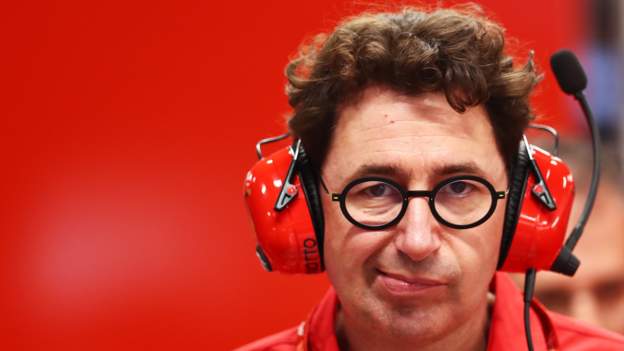 How do Ferrari manage a battle for supremacy that could strangle the success they are fighting so hard for, writes Andrew Benson. 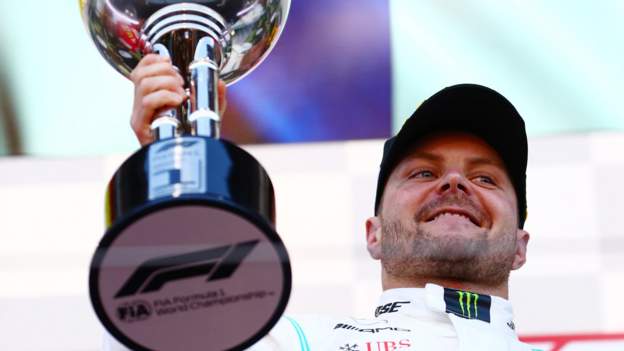 Valtteri Bottas wins the Japanese Grand Prix after overtaking both Ferraris at the start to seal a sixth straight constructors' title for Mercedes.

"Leclerc was penalised five seconds for his collision with Verstappen and a further 10 seconds for Ferrari delaying their decision to bring him in to replace the front wing that was damaged in the incident."

Apparently it's okay to keep running your car when it sprays debris on others. Also shocking is running a whole weekend of events with a typhoon. 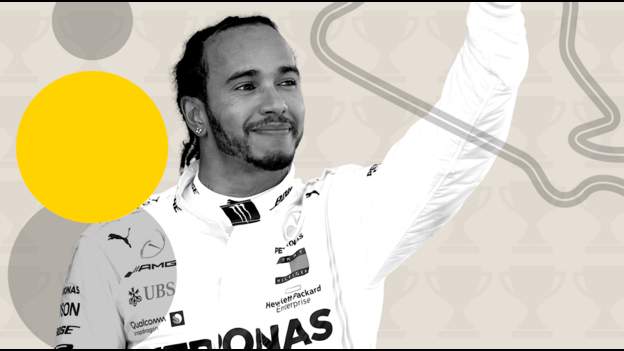 Is Hamilton already the greatest ever?

Lewis Hamilton is now one F1 world title away from Michael Schumacher's record - but dig deeper, and you could argue he's already there...

Hamilton on track to supercede Michael Schumacher for being the greatest of all time.

Curiously the two drivers who dominated this era, Hamilton and Vettel are ahead on pole positions and leading the entire race. Not much in terms of competition in the current era? 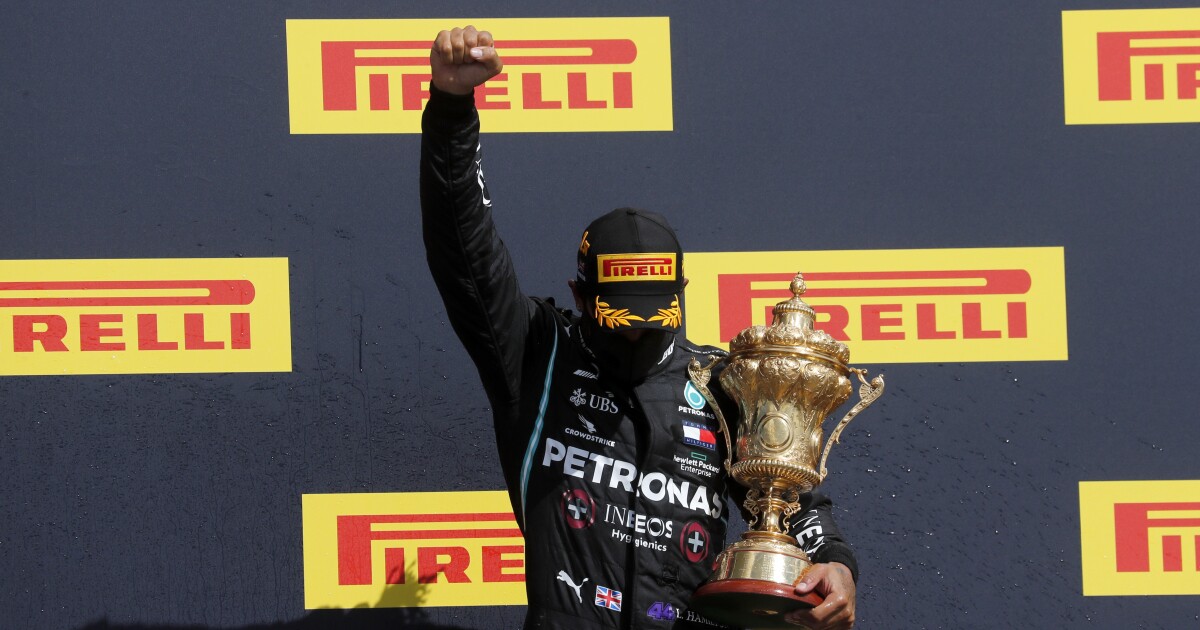 Lewis Hamilton holds on to win the British Grand Prix despite a puncture on the last lap to clinch an 87th career win and move within four of Michael Schumacher's Formula One record.

He said on Letterman he wanted to beat him.

Shock, horror, Formula One is a rich man's game:

At this rate, the Formula One grid in 2021 promises to be about as inclusive as the Italian Grand Prix of 1934, when second place belonged to Hermann zu Leiningen, a Bavarian prince and son of a grandnephew of Queen Victoria. Next year’s 20-strong field will feature three sons of billionaires, in the shape of Lance Stroll, Nicholas Latifi, and now Nikita Mazepin, whom Haas have recruited purely for his pedigree in feeder series and not at all because his chemical magnate father, Dmitry, is among the richest men in Russia and poised to invest heavily in the United States-based team.

Truly, you would find a more representative cross-section of society in the lobby of the Gstaad Palace.

In one sense, it is futile expressing consternation at such nepotism. After all, the stories of motorsport and aristocracy are inextricably entwined.
In 1950, the first instalment of the F1 world championship, the Ambrosiana team’s drivers at Silverstone were Prince Bira of Siam, a member of the Thai royal family, and Emmanuel de Graffenried, a Swiss baron who went to school with the future Shah of Iran. These days are recalled, for all the deference to nobility, as motor racing’s most exotic, buccaneering chapter.

Perhaps, in another 70 years’ time, we will look back with similar nostalgia on the era of Stroll and Latifi, when one in every 10 places in F1 went to the progeny of Canadian tycoons.

The problem is the sport’s gulf between aspiration and reality. Chase Carey, the outgoing chief executive, has tried to portray himself as a democratising force in F1, courting a millennial crowd that Bernie Ecclestone long abhorred because of their lack of disposable income.
Ross Brawn, the managing director and former Ferrari technical chief, has called repeatedly for an end to the cult of the pay driver, arguing that the sport should strive only to assemble the 20 best drivers in the world. The best or the most commercially lucrative? The answer is self-evident when Haas choose Mazepin, the scion of an oligarch, at the expense of Britain’s Callum Ilott, whose parents, as his personal website makes clear, “had to do it on their own”.

The fact that Ilott leads Mazepin by 29 points in this year’s Formula Two title race has been conveniently discarded. So, too, has any memory of how, during a dispute at the Hungaroring in 2016, the Russian punched his British rival in the face. Forget any idea that elevation to F1 rests solely on form or character. The decisive factor, for young drivers chasing their breakthrough to the greatest stage, is whether or not they are conduits to boundless wealth.

The kindest analysis of Haas’s preferment of Mazepin is that they are trying to balance his talent with the strength of his financial connections. That is their prerogative. But for the sake of F1’s meritocratic credentials, it is also hugely dispiriting.

In 2020, the sport has collided headlong with the changes convulsing the world beyond the paddock gates, with Lewis Hamilton wasting no chance to chide it for its lack of diversity. In response, F1 announced during the summer the creation of a foundation that would provide funding to under-represented groups in motorsport. It felt, at the time, like a sea change in philosophy. But when the opportunity finally arose to turn word into deed, with both seats at Haas vacant for 2021, the team threw in their lot with a minted Muscovite and the son of Michael Schumacher.

The selection of Mick Schumacher is understandable, given his surge to the summit of F2 and the power of the family name, reinforced by the tragedy of his father’s brain injury. But the rationale offered by Guenther Steiner, Haas’s team principal, for backing Mazepin is less plausible.

Referring to the success of Niki Lauda, his old colleague at Jaguar, he reflected: “Niki said to me a long time ago, ‘I made it into F1 thanks to a bank that sponsored me, so I could go and buy a drive.’ And he was a three-time world champion.” The difference was that Lauda took out a loan to fund a drive at BRM, earning his subsequent promotions on driving ability alone. That is hardly the same situation with Mazepin, who has never encountered a moment’s financial precariousness, knowing that his every move would be bankrolled by paternal funds.

It has been a story of the decade in F1, and the effects are everywhere you look. There is much talk about the absurdity of Sergio Perez being without a seat in 2021, in light of his consistency and his outshining of several team-mates. But even the Mexican ascended to F1 by virtue of lavish support from Telmex, Carlos Slim’s telecommunications giant. Equally, Pastor Maldonado’s place at Williams could be explained only by the £29 million he brought in annually from PDVSA, the state oil company in his native Venezuela.

If F1 could simply acknowledge that it was happy to be a finishing school for the rich and the well-connected, none of this would matter. And yet it continues to make airy commitments to expand the talent pool and to search for the finest prodigies wherever they are. While F1 talks a good game in its striving for a more egalitarian grid, it is failing dismally to bring that goal to fruition. In its much-trumpeted quest to discover the best, the appointment of Mazepin confirms not only that the sport is falling short, but that it has ceased even to try.

F1 is shit, and has been for years.

‘Who do you think you are, Stirling Moss?’

‘Do you think it will become “Who do you think you are, Lewis Hamilton?’

‘Do you think Sports Personality of the year will be Hamilton?’

‘Probably. He is ethnic minority’

‘Well Tyson Fury is a gypsy.’

‘How long have we been in here?