It’s all a bigly stable genius 5-D chess game to Daddy Trump, I’m sure. He’s gonna own those libtards any day now ....

Hopefully no one followed Wilbur Ross' advice to get a loan and pay a little interest.

Obama: a strange and sad case of missed opportunity with it all handed to him on a plate. The man who could have been the superman of the American ideal and yet he chose to squander it all on identity politics and further military misadventures.

Obama was a significantly better candidate than president.

I'm waiting for alternative facts to be presented. I'm sure at least one person must have benefitted from it.

If anything - doesn't simplified tax forms mean less bureaucracy and now the civil service can do something more value added for the American people?

Someone should give the President a tie clip.

Or a clip-on tie of correct length.

The mask slips and behold the sulking face of the politics of envy....

Why is the US having a second summit to discuss dismantling nuclear weapons with North Korea when it is simultaneously trying to exit all sorts of treaties and engage in an arms race with that one nation in the world with a proven nuclear arsenal second only to the US?

Pimpernel Smith said:
The mask slips and behold the sulking face of the politics of envy....

^ That really reminds me of the "golf clap" from the Charlie Sheen/Emilio Estevez classic, "Men at Work":

Pimpernel Smith said:
The mask slips and behold the sulking face of the politics of envy....

The internet is ruthless...

Very fake Twitter post indeed! I saw AOC applauding several times and even standing-up to chant ''USA! USA!'' i.e. parts on Alice Marie Johnson, HIV, on women's rights and numbers in congress and work. Oh did Trump play them! Mind you she did spit the dummy out when he mentioned America would never be Socialist. 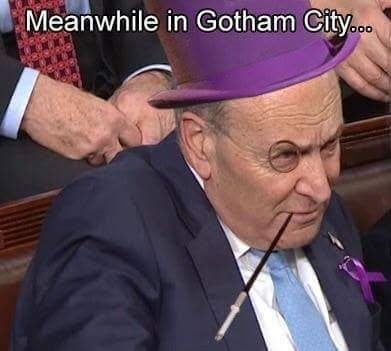 So it looks as though a deal has been reached to avoid another shutdown and to provide some money for a wall and for various other improvements along the border. However, it's not enough for President Trump and so he has stated that he will declare a State of Emergency.

This will then, apparently, enable him to use funds for various other purposes (military, disaster relief) and apply those funds to a wall.

However, Trump then seemed to void his own case for declaring an emergency by saying, “I didn’t need to do this, but I’d rather do it much faster.”

Arnathor said:
I wonder how long it will be now until LIUNA has a little chat with

I think it's the person Thruth thinks is my political darling.

Fwiffo said:
I think it's the person Thruth thinks is my political darling.
Click to expand...

i dont know who LIUNA is

Rambo said:
i dont know who LIUNA is
Click to expand...

I googled it. Some labour union. Probably another Alex Jones conspiracy thing.

Autopsy of a Dead Coup:


Ben Carson's 'signature' HUD initiative has gone nowhere
“No one actually knows what they are supposed to do,” one public housing authority director said.

Last June, Housing and Urban Development Secretary Ben Carson traveled to his hometown of Detroit to unveil his "signature" initiative: one-stop shops for social services known as EnVision Centers in 17 communities nationwide. The centers were described in lofty terms as "centralized hubs" offering low-income residents "support services that can help them achieve self-sufficiency."
But eight months later, not one has opened and the program remains mired in confusion and bureaucratic tangles, according to interviews with HUD officials and staffers for nonprofits and housing authorities that have been designated as EnVision Centers.

Some critics say the program appears to be little more than a rebranding of work that was already underway.
"No one actually knows what they are supposed to do," said Chad Williams, executive director of the Southern Nevada Regional Housing Authority, which includes Las Vegas where the affordable housing crisis is severe. "I was approached to run one, and I said: 'What does it do? Where's the funding?'"

Williams says he declined to participate after finding out there was no money attached. "EnVision Centers are a failed policy perception," Williams said. "I guess they give the image that HUD is doing something."
Last edited: Feb 21, 2019

Because they mine coal and make cheap knockoff knick knacks that no one is interested in?


Because you're practically his only mate so you're the best friend?

Kim traveling to Vietnam via bullet proof train and armored vehicles, wonder if there be any assassination attempt.

Pauly Chase said:
Kim traveling to Vietnam via bullet proof train and armored vehicles, wonder if there be any assassination attempt.
Click to expand...

From his own retinue?