Rambo said:
Why Does the NYPD Need Secret X-Ray Vans?
Click to expand...

Electrosmog should be considered electrotoxins.

Germans do it better

Another good video of the German LEO doing their job;

Hundreds Of Cops Kicked Off Force For Committing Sex Crimes

She would later tell a judge she was splayed outside the patrol car for a pat-down, made to lift her shirt to prove she wasn't hiding anything, then to pull down her pants when the officer still wasn't convinced. He shined his flashlight between her legs, she said, then ordered her to sit in the squad car and face him as he towered above. His gun in sight, she said she pleaded "No, sir" as he unzipped his fly and exposed himself with a hurried directive.

"Come on," the woman, identified in police reports as J.L., said she was told before she began giving him oral sex. "I don't have all night."
Click to expand...

I know who the trooper was in THAT situation.

I know who the trooper was in THAT situation.
Click to expand...

Report: Marksville, Where Jeremy Mardis Was Killed, Is an Insane, Dysfunctional Circus

My white neighbor thought I was breaking into my own apartment. Nineteen cops showed up.

Just a friendly reminder that cops are worse than criminals when it comes to every day life. That is fucked up.

Very good article on why there never seems to be any cop reform - the unions bargain against it.

The Next Fight for Racial Justice: Police Union Reform

The Next Fight for Racial Justice: Police Union Reform
Deep in the weeds of union contract agreements lie provisions that protect cops from oversight.
By Steven Cohen
December 2, 2015
The collective bargaining agreement between the City of Chicago and Lodge No. 7 of the Fraternal Order of Police (FOP) is not an exciting document. Many of its 158 densely worded pages are devoted to topics like insurance subrogation and access to the mailboxes at department headquarters. In 2014, the City Council voted unanimously, 49-0, to approve the current agreement, which runs through June 30, 2017. Until recently, the next set of negotiations promised to play out the same way the last one did, the same way similar ones have, for years, in municipalities big and small, all across the country: quietly, behind closed doors, far from the eyes of the communities most affected by the outcome.

Signal
Chicago’s police officers union has emerged not just as a political impediment to reform, but also as a major institutional foundation underpinning racial injustice.

Steven Cohen
Now, as racial justice activists shine new light on the troubling consequences of police union contracting nationwide, Chicago has its own morbid reasons to scrutinize what has long been a fatally overlooked aspect of a fatally overlooked crisis. Within the pervasive system of corruption, complicity, and negligence that led to Laquan McDonald’s death and then facilitated its cover-up, Chicago’s police officers union has emerged not just as a political impediment to reform, but also as a major institutional foundation underpinning racial injustice.

It was a Chicago FOP spokesman, Pat Camden, who first breathed life into the slander that McDonald, a 17-year-old, lunged at detective Jason Van Dyck before Van Dyck shot him 16 times. The officers who allegedly erased 86 minutes of camera footage from a nearby Burger King that would have exposed this lie were presumably union members, too—as was whoever posted a bail fund for Van Dyck on the FOP’s website.

Investigators attempting to uncover the truth of McDonald’s killing would have had to contend with Section 6.2e of the FOP’s collective bargaining agreement, which allows officers present at the scene of a shooting to postpone their testimony. If the city had elected to share the details of the investigatory findings with the public, rather than spend thousands in taxpayer dollars in defense of their secrecy, Section 6.9 would have prevented officials from revealing Van Dyck’s identity. If Van Dyck somehow manages to remain on the Chicago police force once his trial for first-degree murder has concluded, the record of his paid desk suspension will eventually be expunged, along with the files on his lengthy history of prior misconduct, in accordance with Section 8.4.

Of the 14 other major U.S. cities featured on a new infographic released Wednesday as part of Campaign Zero’s Police Union Contract Project, seven have collective bargaining agreements with similar provisions delaying the interrogation of officers being investigated for use of force and erasing the resulting documentation of abuse. Thirteen have agreements that accomplish one or the other. In Austin, Houston, Louisville, and San Antonio, police union contracts go so far as to require 48-hour notice before an interview with an officer can be conducted, a precaution predicated on the utterly baseless claim that the buffer period helps preserve accurate memory. (Based on the available evidence, it’s more likely that the opposite is the case.) Before Cleveland’s recent settlement with the Justice Department, the personnel files of its police were wiped clean every two years. 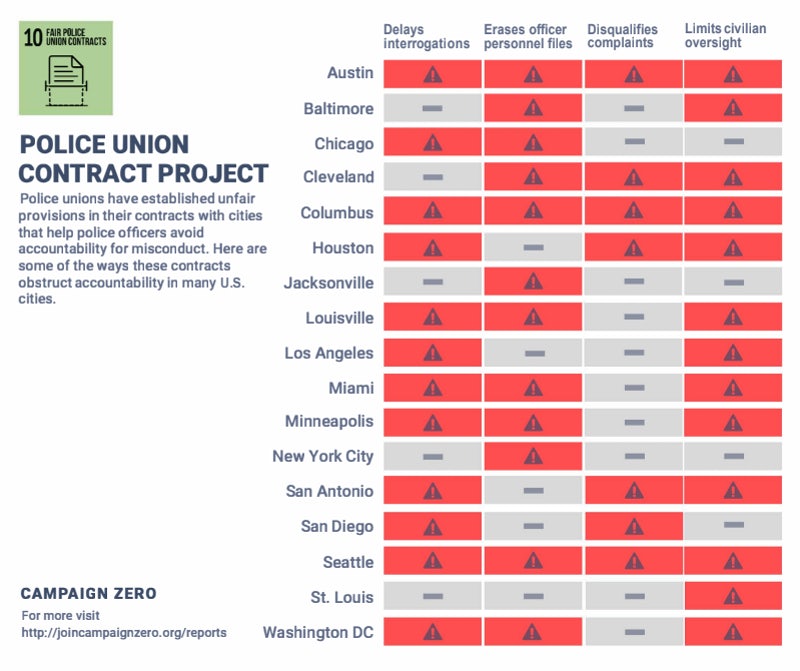 “Police unions have been very strategic in embedding these measures” in contracting language as well as in state and local ordinances, Samuel Sinyangwe, a co-founder of the Campaign Zero criminal justice reform platform, told the New Republic. Often, that strategy has involved latching onto the tough-on-crime policies that exacerbate the problems of urban crime and force officers into precarious situations in the first place.

“Fair police union contracts” is the last and least sexy of the 10 fields into which Campaign Zero divides its broader policy agenda. But it’s largely because of how little it’s been discussed that Campaign Zero singled out union reform for one of its first “deep dives.” “In the aftermath of Ferguson, we saw that the unions were acting as one of the main political forces in opposition to any effort to reform officer conduct,” Sinyangwe explained. “And I think that what the issue of the police contracts can do is illustrate the ways that culture structures itself and manifests in policy.”

By June of this year, Campaign Zero was submitting FOIA requests for collective bargaining contracts and gathering whatever information was available online—which turned out to be quite a bit. (In Chicago, for instance, both the union and the city post the contract on their respective websites.) “This issue has really been hidden in plain sight, it just hasn’t gotten a lot of attention,” said Sinyangwe. Between their own extensive research, and some outside help from experts, they were able to identify the patterns now examined in greater detail on CheckThePolice.org, where you can find links to the materials they’ve collected on dozens of U.S. municipalities. “It’s the most complete informational resource I’ve seen on this subject,” said Samuel Walker, a University of Nebraska criminal justice professor who periodically consults with Campaign Zero.

In the interest of forging consensus, Sinyangwe explained, Campaign Zero limited its infographic to the four recurring categories of police protections in which the purported justifications are most obviously lacking. (What legitimate labor or public safety interest can be said to be served by depriving supervisors of accurate files on the officers under their command?) The other two are provisions that preclude claims of misconduct filed after a certain period and—most common of all—provisions that restrict the authority of civilian oversight bodies to discipline officers. But there are other areas of contracting language that may end up at the center of subsequent data drops, and Campaign Zero’s underlying fact-finding mission will continue, city by city. “Ultimately, we want to know, what should a model police contract look like?” said Sinyangwe.

For now, the more immediate goal is to disseminate the information they do have and collaborate with groups on the ground in places where police contracts are set to expire or already have. “There are so many people who want to be doing this work and are doing this work,” said Sinyangwe. “So the question for us is always, how can we support what they’re doing and how can we create the spaces to make that work possible?”

In Chicago, at least, their efforts will find better traction than they would have twelve months ago, when the police collective bargaining agreement was sailing through the halls of government and Laquan McDonald was just another black kid gunned down on the streets of Chicago. Last year, Alderman Pat Dowell of the City Council’s Black Caucus voted in favor of the current collective bargaining agreement, as did 48 of his colleagues, black and white. Last week, he told Reuters, “Our caucus has vowed to work with other caucuses and other of our colleagues to review the FOP contract to make sure there are tougher policies and sanctions against police officers who do egregious or illegal acts.” Digging out the barriers police unions have erected to obstruct accountability is going to be a difficult battle. That it’s being fought at all is its own sort of progress.

For 55 officers involved in fatal shootings this year, it wasn’t their first time

Tamir Rice Decision Shows: You Can Get Away With Murder

This isn't creepy at all

The new way police are surveilling you: Calculating your threat ‘score’

These freeman of the land videos are always good to watch. However this time the freemen get shafted by the cops. The first freeman gets shafted BIG TIME!!!

First video goes for 90 seconds and is the best one imo.

these fucking constitutional retards. The guy from Idaho was the best. "I don't have an ID. My person does. But I don't wish to create joinder with you."

Chicago police are destroying their own dashboard cameras

The NYPD Has Secretly Been Spying On Cell Phones Since 2008

Better be safe than sorry

Leitmotif said:
Better be safe than sorry
Click to expand...

stop trolling or i'll call in a drug report to the OPD and you'll see how you like it.

Rambo said:
stop trolling or i'll call in a drug report to the OPD and you'll see how you like it.
Click to expand...

Dont worry, i have a badge.

Leitmotif said:
Dont worry, i have a badge.
Click to expand...